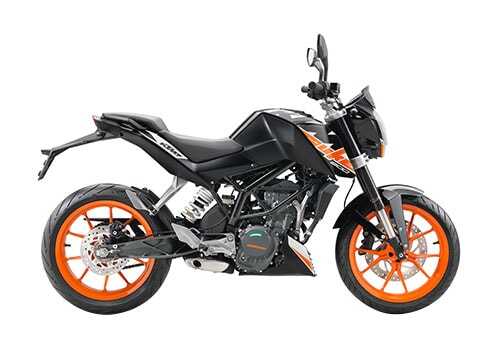 The Duke 200 was KTM’s first offering to the Indian motorcycle segment. The current iteration of the bike retails in India at an ex-showroom MSRP of Rs. 2, 27,693. Although the bike has been around since 2012, it remains the best-selling KTM motorcycle.

Well, there are many reasons for that. And this post will shine a light on some of them in the following sections.

Design and features that are second to none

The KTM Duke 200 got a much-needed electromechanical as well as cosmetic update in 2020. That was one of the major updates the Duke 200 got from its Austrian manufacturer in 2012.

The latest iteration of the bike is more or less, an overhaul of the original Duke 200. The reason is simple – to keep the bike relevant, KTM designers went back to their design studio. The result is a completely new bike that has been built from scratch. The latest Duke 200 looks menacing thanks to the sharp lines merged harmoniously with its body panels.

The bike’s digital instrument cluster is the one that is also found in the 125 Duke and the 250 Duke. The latest Duke 200 has a completely redesigned headlamp unit. The overall design of the LED DRL has also been tweaked.

The overall design language of the bike is similar to the latest range of KTM bikes in India. Hence, the Duke 200 looks more or less the same as the Duke 125, 250 and the 390. The Duke 200 and the rest of the Duke range shares the front look, seat layouts and fuel tank designs. It is not that people are complaining as all the Dukes look amazing!

When the Indian government chose to enforce the BS 6 emission norms across the nation, KTM purists were concerned.

The reason is that KTM engines are known for their hooligan-like, rev-happy nature. It is the one aspect that makes a KTM bike an enthusiast’s machine. People thought that to make the Duke 200’s engine BS6-compliant, KTM would clip its wings! Thankfully though, that did not happen.

The engine on the bike is the same 200 CC, single-cylinder, fuel-injected, liquid-cooled, now BS6-compliant unit. KTM engineers kept the raw character of the engine untouched. To make the bike BS6-compliant, they simply tweaked the vehicle’s catalytic converter unit.

The latest iteration of the bike retains its original premium cycle parts from its BS4 predecessor. It means that the bike still has a 43 MM upside-down fork suspension from WP (Apex). The rear monoshock suspension is also from the WP (Apex). However, in the BS4 model, the rear monoshock unit came with the preload-adjustable feature. That has been phased out. The reason is that the latest iteration of the bike is a bit heavier than its predecessor. Hence, adjusting the monoshock to a softer setting can worsen high-speed stability.

The Trellis subframe of the bike has been tweaked as well. Compared to its predecessor, the latest Duke 200 handles really well on straight lines. The bike also feels nimble in the corners as well as during overtaking other vehicles.

All leading lenders in India have bike loan schemes designed for KTM bikes. That would allow one to get the chance to feel why KTM bikes have become a phenomenon in India. If the reader wants to learn more about the Duke 200, they should take a test ride of the bike.